Since beginning Melbourne Curious, I have received an overwhelming number of requests to feature Flinders Street Station. As Melbourne's most iconic landmark, this probably should not have come as a surprise. I must confess, however, that Flinders Street Station has never appealed to me like other Melbourne buildings. I have always found the redbrick and mustard coloured facade grimy-looking. The bland, modernised concourse inside the station also coloured my impression of the building as a whole. As a result, I had never looked into the building's history - until now! And I must admit I was completely blown away! I have become enchanted by the rich history of the building: were you aware that it was once the busiest station in the world? Did you know the rooftop was often used as a running track where joggers could be seen from Southbank? What about the beautiful old ballroom (which still exists) on the third floor? I hope to cover as much of this fascinating history as possible - if I have missed anything please feel free to email me. Enjoy!

Trains have been arriving at the site of Flinders Street Station long before the construction of the iconic building we recognise today. In 1854, the Melbourne Terminus was the first city railway station built in Australia and was situated on the corner of Flinders and Elizabeth Streets. Originally, it comprised only one weatherboard building and a small platform. This serviced the first railway line in Victoria, running only to Sandridge (Port Melbourne). A number of additions were made to the terminus over the following years, including the introduction of a St Kilda line in 1857 and extra platforms from 1877 onwards. Nonetheless, the collection of low timber and brick buildings with simple corrugated iron roofs was a far-cry from the grand station that stands today!

Melbourne Boom Time
In the 1880s, Melbourne enjoyed a boom-time following the Victorian gold rush. The city became larger than most European capitals, the population doubled in a decade, and a fortune was poured into the construction of impressive buildings that rivalled those of New York, Chicago and London. This era also saw the suburban railway network expand significantly. According to Jenny Davies, author of Beyond the Facade, the Melbourne Terminus was deemed “an eyesore, inefficient and uneconomical” and a new station was proposed.

The Competition
In 1889, a worldwide competition was held for the design of the new station. In May 1900, the first prize was awarded to two Victorian Railways employees, Fawcett and Ashworth, for their design entitled Green Light. As you can see below, the plans differ slightly from the current Flinders Street Station: a fourth storey and basement were added; and the beautifully ornate Art Nouveau arched iron roof on the Swanston Street concourse was never built (due to expense). While the station is most frequently labelled as Edwardian Baroque, Fawcett and Ashworth described their design as being influenced by the “French Renaissance” style. The French influence is most apparent in the symmetrical composition of the main Flinders Street block, the use of giant order, heavily rusticated piers, squat domes and broad arches. This aesthetic was combined with architectural features familiar in Melbourne at the time, including the red brick and golden-cream contrast, the use of banking, and the grouping of windows vertically under tall arches.

A Melbourne Icon is Born
Flinders Street Station was officially opened to the public in 1910. By this stage, the railway lines reached Werribee, Rockbank, Diggers Rest, Craigieburn, South Yan Yean, Eltham, Croydon, Bayswater, Dandenong, Aspendale and Sandringham. At the time of opening, it was rumoured to be the busiest passenger station in the world! By the 1930s, Flinders Street Station had on average 241,130 passengers per week, putting it well-ahead of any other station in the world, including Gare Saint-Lazare, Paris (150,000 passengers) and Grand Central Station, New York (108,843 passengers).

The Victorian Railways Institute
The Victorian Railways Institute officially opened in 1910 and its offices were located inside the brand-new Flinders Street Station. The organisation was created for the “self-betterment” of railway employees. It hoped to increase staff morale and workplace stability in order to reduce the likelihood of industrial upheaval - of particular concern after the 1903 rail strikes. The result was extraordinary! The institute provided lectures ranging from the technical (bookkeeping and accountancy), to the philosophical (“Nietzsche and the Present German Spirit” in WWI), to the bizarre (“Reminiscences of an Army Surgeon in the Turko-Servian and Turko-Russian Wars of 1876-78”)! The station housed the Institute’s clubrooms for a broad range of clubs, including debating, fencing, wine appreciation, poetry, cat lovers, and even “rose devotees”!  The Institute  also created some amazing facilities, including a beautiful ballroom, gymnasium, billiards room, lecture theatre, library and even a childcare nursery!

The Ballroom
The Ballroom still exists on the third floor of the station. The beautiful vaulted, pressed metal ceiling spans the full width of the building and the room can seat 400 people. In 1918, the ballroom held dance classes, ballroom competitions and socials every Wednesday night. By 1934, it was used practically six nights per week and was one of the most popular dancehalls in Melbourne. During WWII, many dances were held for Allied servicemen on leave. The Victorian Railways Institute decided to close the ballroom (as it was in need of repair) and the last dance was held on 10 September in 1983.

The manner in which the ballroom has been left to deteriorate is appalling. Without any preservation measures in place, the room is at risk of deteriorating beyond repair through sheer neglect. The integral structure of the room is intact and, if repaired/preserved, there are many brilliant ways it could be used today: a beautiful restaurant; art gallery; museum about the history of the station or city; or a boutique shop! The ballroom is integral to Melbourne's character and history. It is a travesty that (a) it has been neglected for so long, and (b) it is not accessible to the people of Melbourne.

The Gymnasium
The Victorian Railways Institute also provided a gymnasium (in the traditional sense) for its employees! In addition to the gymnasium, the flat rooftop of the station was used  frequently as a 440-yard running track! Apparently it was not uncommon to see people running on the roof of the station from across the river at Southbank!

The Institute also provided a childcare facility for the use of rail travellers. When the nursery was opened in 1933, there were only three of its kind in the world (the other two being in Paris and Chicago). This service was often used by mothers coming from suburban train stations to the city who would leave their small children in care as they went about their day in town. An outbreak of Polio in 1937 led to the temporary closure of the nursery for one year (at this time, children did not even attend primary school, lest the disease spread, and classes were transmitted by radio to children's homes!) The nursery was permanently closed in 1942, allegedly because of war precautions. Regrettably, much of the nursery was demolished in the 1980s during renovations - yet another travesty!


Degraves Street Subway
While the idea of a subway to decrease congestion had been bandied about since 1929, Campbell Arcade (or the Degraves Street Subway as it is now known) was officially approved in 1950. The Campbell Arcade entrance was opened in November 1954 and is now famous for its Art Deco pink ceramic tiled walls and black marble columns. The arcade still contains a number of shops (which are quite cute and quirky!) and exhibits artwork in glass boxes.

There have been numerous attempts to demolish Flinders Street Station, particularly during the 1960s and 70s. The fact that we have come so close to completely losing Flinders Street Station makes the mind boggle. It also reinforces the need for us to remain on our toes in the present day about other buildings that developers/governments tell us ought to be 'upgraded.' There are many ways to preserve historic buildings while increasing their functionality in a modern city. As a reaction to a 1974 plan to redevelop the site, Bill Howie of Radio 3AK said, "by all means, let's have a modern, progressive Melbourne... but in our haste let's not ignore the features that give the city its own special charm, for if we do, we will create for ourselves a soulless exercise in concrete and steel that may please the planners but do very little for those who work and live here." These sentiments ring just as true today! 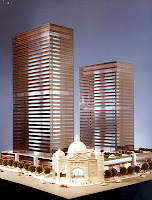 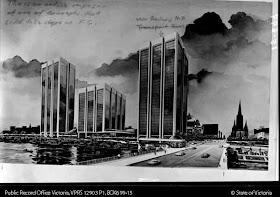 Nonetheless, a major redevelopment of the station took place in 1983. Nobody doubted that the station was in need of refurbishment: hot water was not widely available; the roofs leaked in heavy rain; and gaps in the windows were being blocked with stickytape! The renovation that was decided upon, however, was called "vandalism" by the City of Melbourne. In the 1990s the Swanston Street Concourse was also renovated in a similarly detrimental way, with the National Trust stating that it had assumed “the character of a modern shopping centre."

As Jenny Davies notes in Beyond the Facade, "if the budget had been $50 million in 1982, Flinders Street Station could have been restored to its turn of the century glory." Instead, only $7 million was allocated to the project and the developers decided to completely ignore heritage suggestions! Renovations of the great stations of Paris, New York and Washington demonstrate that it is possible to preserve old-world charm and grandeur of historical buildings while allowing for functionality and progression. Why we continue to denigrate our city's heritage for the sake of a myopic view of progression is beyond belief!

For More Information
I could not hope to cover every aspect of the history of Flinders Street Station in this post. If your interest has been piqued, I recommend having a read of Jenny Davies' excellent book called Beyond the Facade: Flinders Street, More Than Just a Railway Station.  The detrimental renovations of the station and the appalling neglect of the ballroom are devastating. Hopefully we can learn from these mistakes and take action now! There are urgent threats facing other heritage buildings as we speak and we must act now if we are not to fall into the same traps! Click here for an eye-opening article on this topic by Rupert Mann, President of Melbourne Heritage Action, in The Age.

Thank you to those who requested the feature on Flinders Street Station. The next time I am catching the train, the fascinating history and old images of the station will now definitely be in my mind!